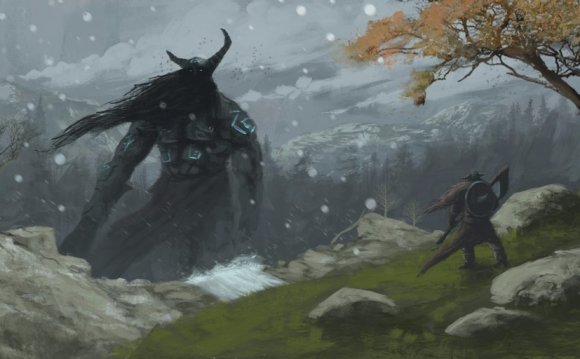 In Norse mythology, Ymir is known as the first being. He was a giant created from drops of water that formed when the ice of Niflheim mixed with the heat of Muspelheim. He was considered the father of all ice giants. The Norse creation narrative says that his hermaphroditic body produced beings that would go on to bear countless generations. His journey ended in tragedy, but because of his evil nature, no one can feel pity for the giant. His demise led to the creation of humans and the Earth.

In the Norse creation myth, the story starts as many other creation stories do. In the beginning, there was nothing. There was no sand, sea or waves. Neither heaven nor Earth existed. However, long before the Earth was made, Niflheim was created. It contained a spring that flowed into 12 rivers. In the southern part was Muspell, which was incredibly hot and guarded by a giant named Surt who carried a flaming sword. In the north, there was Ginnungagap. The rivers froze here, and everything was covered in ice. The warm air of Muspell reached the coldness of Ginnungagap, causing the ice to thaw and drip. The drops thickened and began to form into the shape of a man. This was the creation of Ymir, the ancestor of all frost giants.

The ice continued to drip and eventually formed a cow. Her name was Audumla and she produced four flowing rivers of milk that Ymir fed from. The cow was nourished by licking the salty, rime-covered stones surrounding her. The myth says that as the days progressed and Audumla began to lick away the stones, a man began to appear. On the first day, the hair of the man was uncovered. On the second, his entire head emerged from the stones. On the third day, he was completely uncovered and came out from the stones. His name was Buri and he eventually had a son named Bor, who proposed marriage to a daughter of a giant named Bestla. They had three sons, Ve, Vili and Odin. Odin would become known as one of the most powerful gods, while the brothers together are known as the rulers of heaven and Earth.

The creation of Ymir is fascinating on its own, but he is also responsible for the creation of the Earth, just not in the way that one might think.

The Creation of Earth

Ymir eventually turned into an evil being. Bor’s three sons found themselves in an altercation with the frost giant and were eventually forced to kill him. So much blood flowed from his body that all but one frost giant drowned, and he only survived by building an ark for himself and his family. Odin and his brothers dragged the giant’s body to the center of Ginnungagap, where they made the Earth from his body. His blood became the sea and his bones became the rocks and crags. His hair became the trees. His skull was turned into the sky, where the brothers added sparks and molten rock from Muspell to make the stars. Ymir’s brains were thrown into the sky to form clouds. The earth was flat, so they used Ymir’s eyelashes to block the areas of the earth that they wanted to keep the giants contained in.

Odin and his brothers found two logs on a seashore and made people out of them. One brother gave the people life and breath, while another gave them movement and consciousness. The last brother gave them speech, hearing, sight and faces. This was the beginning of humans. All the generations to follow could be traced back to these two people.

Odin and his brothers left the heavens unlit during their creation. One of the descendants of the two people created from the logs had two children. These children were simply stunning, and the father honored them with the names Sol and Moon. The gods were said to be jealous of the children and when their father seemed less than worthy of them, they took it as a sign to snatch away the children and put them in the sky. Sol was commanded to drive a chariot, carrying the sun across the skies. She drives so fast in the north because she is chased by a giant wolf. Moon takes the same path across the sky after his sister but is not as rushed as she is.

The brothers did make sure that there was a pathway between heaven and the Earth during their creation. A rainbow is meant to serve as a bridge between the two worlds. Its perfect shape and vibrant colors are meant to symbolize its origins from the gods. It is said that the rainbow will break apart when the men of Muspell try to scale it to get to heaven.

Ymir did not marry, or have children in the traditional sense. However, his myth says that while he slept, he perspired. From this perspiration, a male and female emerged from his arms. Together, his legs produced a six-headed son. While Ymir was a giant, his existence is indirectly responsible for the human race as his body was turned into the Earth, and logs on the Earth were turned into humans.

Ymir is typically depicted with his cow, which can be said to be his main symbol. The cow was both his companion and his source of nourishment. Other well-known artistic tributes to Ymir show him in the battle with the three brothers that would end with the loss of his life but the creation of the Earth.

The story of Ymir and creation often serves as a lesson for those who have heard it. It is speculated that his death represents the taming of the wild and the unstoppable force in humans that is necessary for the creation of anything progressive. His death also symbolizes how something that is ugly and chaotic can be reformed and reimagined into something beautiful.