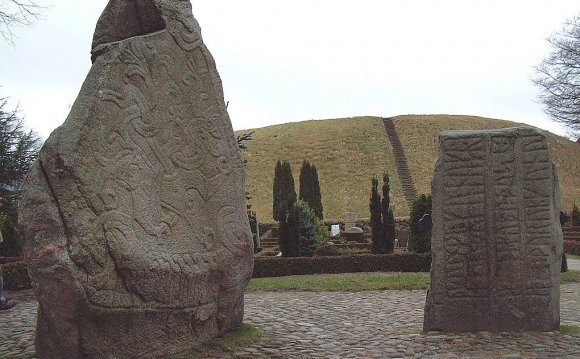 In Norse mythology, Hel features as the goddess of the underworld. She was sent by Odin to Helheim/Niflheim to preside over the spirits of the dead, except for those who were killed in battle and went to Valhalla. It was her job to determine the fate of the souls who entered her realm.

Hel is often depicted with her bones on the outside of her body rather than the inside. She is typically portrayed in black and white, as well, showing that she represents both sides of all spectrums.

She is a daughter of Loki, the trickster, and Angrboda. It is believed that her name is the source of the English word "hell, " because of her connection to the underworld. Hel appears in the Poetic Edda and Prose Edda, and to sentence someone to "go to Hel" means to wish them death. Following the death of Baldur, the goddess Frigga sends Hermóðr to offer Hel ransom. Hermóðr stays the night at Helheim, and in the morning begs Hel to allow his brother to return home because Baldur is so loved by the gods of the Æsir. Hel tells him, "If all things in the world, alive or dead, weep for him, then he will be allowed to return to the Æsir. If anyone speaks against him or refuses to cry, then he will remain with Hel." A female giant refuses to feel bad for Baldur, so he is stuck with Hel for a bit longer.

Jacob Grimm theorized that Hel, whom he called by the Proto-Germanic name Halja, was, in fact, a "half-goddess." She cannot be proven to be of full Divine blood; in Hel's case, Loki impregnated the giantess Angrboda.