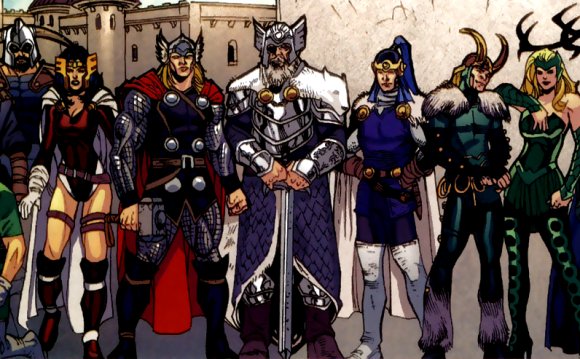 The Norse gods were mortal, and only through Iðunn's apples could they hope to live until Ragnarök. Image by J. Penrose, 1890.

In Old Norse, the Æsir or Aesir are the principal gods of the Norse pantheon. They are one of two major clans of Norse deities (the other being the Vanir). Among the Aesir are many famous figures found in the Scandinavian tales such as Odin, Frigg, Thor, Baldr and Tyr. These Norse gods are understood to dwell in Asgard, a realm separated from the mortal world (Midgard) by Bifrost (the rainbow bridge). The mythic sources also occasionally utilize the term "Aesir" as a general collective noun for all Norse gods (both Aesir and Vanir).

Norse Mythology is renowned for its rich tapestry of colorful stories, memorable characters, heroic sacrifice, and epic battles. In the history of northern Europe, this collection of tales brought meaning and purpose to both the Scandinavian peoples and the northern Germanic tribes for many centuries.

The Proto-Germanic word *ansuz is believed to be derived from the Proto-Indo-European *ansu (meaning breath, god). The cognate Old English term is os, which can be translated as “god, ” or “deity.”Ása is the genitive form that appears as a prefix to indicate membership in the Æsir in "Ása-Þórr, " and also in the compound Ásatrú, a sect of Germanic Neopaganism.

The twelfth-century Icelandic historian Snorri Sturluson's Ynglinga saga mistakenly identifies the Æsir with Asia, an explanation repeated as late as in the seventeenth century by Johannes Schefferus, who held that Æsir referred to "Asian emperors."

The country east of the Tanaquisl in Asia was called Asaland, or Asaheim, and the chief city in that land was called Asgaard. In that city was a chief called Odin, and it was a great place for sacrifice.

As Norse deities, the Aesir belonged to a complex religious, mythological and cosmological belief system shared by the Scandinavian and Germanic peoples. This mythological tradition, of which the Scandinavian (and particularly Icelandic) sub-groups are best preserved, developed in the period from the first manifestations of religious and material culture in approximately 1000 B.C.E. until the Christianization of the area, a process that occurred primarily from 900-1200 C.E. The tales recorded within this mythological corpus tend to exemplify a unified cultural focus on physical prowess and military might.

The Aesir in Norse Mythology

Within this framework, Norse cosmology postulates three separate "clans" of deities: the Aesir, the Vanir, and the Jotun. The distinction between Aesir and Vanir is relative, for the two are said to have made peace, exchanged hostages, intermarried and reigned together after a prolonged war. In fact, the most significant divergence between the two groups is in their respective areas of influence, with the Aesir representing war and conquest, and the Vanir representing exploration, fertility and wealth. The Jotun, on the other hand, are seen as a generally malefic (though wise) race of giants who represented the primary adversaries of the Aesir and Vanir. The Æsir, though immortal, were somewhat more "perishable" than their Indo-European brethren. Not only was their eternal youth maintained artificially (through the consumption of Iðunn's golden apples), they could also be slain (for instance, many were preordained to perish at the cataclysmic battle of Ragnarök).