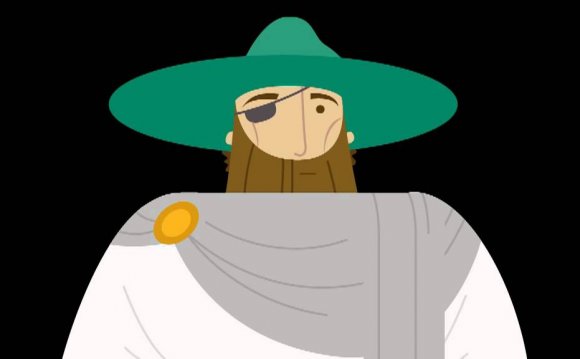 For a very long time, the Vikings believed in many gods and goddesses. These gods were called the Norse gods, or gods of the north. The gods of the Vikings looked like ordinary people. They had the same faults that people have like jealously and temper. The Norse gods were not immortal, but they lived very long lives and had magical powers. The Norse gods made their home high in the sky, in a place called Asgard. The gods' palaces were made of gold and silver. The prettiest and biggest of them all was Odin's home, Valhalla. (Odin was king of the gods.)

The gods were forever running into dangerous creatures, giants especially, sometimes on purpose! The Vikings never worried that their gods might be hurt in their encounters with giants. The giants were big, but the gods were clever. Besides, the Norse gods could always get away if things got too rough. A rainbow bridge, named Bifrost, connected Asgard to Middle Earth. The god Heimdall guarded the bridge so that no giant could enter Asgard (or anyone else uninvited.) Like all the Norse gods, Heimdall had magical powers. He could see for 100 miles night or day. He also had a great sense of hearing. He could hear grass grow! Hardly anyone ever got by him.

Odin (also known as Woden) was the god of poetry, wine, knowledge, and war, as well as ruler of the gods. Odin was sometimes called the Raven God because he had two ravens who sat on him, one on each shoulder, named Hugin (Thought) and Munin (Mind). Every day, Hugin and Munin flew around the Viking world, spying on humans, creatures, and gods. They returned to Odin each evening, and reported everything they saw like the tattletales they were. Odin was grateful to his two ravens for the news they reported. Odin kept his ravens, but he also made a deal with a wise, old giant. Odin traded one of his eyes in exchange for all the wisdom in the world. That's why Odin has two eyes early in his life as ruler, but only one eye later on that he covered with an eye patch, and also explains how he became the god of knowledge.

Thor was Odin's son. Thor was the god of strength, thunder, storms, and big muscles. He had a magical belt, a magic hammer, iron gloves, and a chariot pulled by two goats named Toothnasher and Toothgrinder.