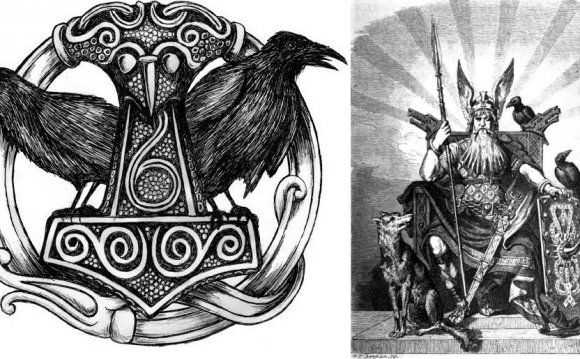 Winter Solstice, the time of the year when the days get longer and the sun begins to return was truly a cause for celebration among our ancestors in Scandinavia. Their Midwinter Feast lasted at least twelve days. So there are the twelve days of Christmas.

Most Christmas traditions are rooted deep in ancient Yule rituals, many coming from the Vikings. Historic evidence indicates that Jesus was not born on December 25, but in the Spring. Why is then Christmas celebrated on December 25? A common theory is that the Christian church designated this date as the day of Christ's birth to coincide with the Nordic Midvinter Solstice celebrations, as well as with a Roman midwinder fest called Saturnalia, in order to "facilitate" the conversion of "heathens" to Christianity.

At Midwinter, or Solstice, the Vikings honored their Asa Gods with religious rituals and feasting. They sacrificed a wild boar to Frey, the God of fertility and farming, to assure a good growing season in the coming year. The meat was then cooked and eaten at the feast. This is the origin of today's Christmas ham in Scandinavia.

During the festivities they burned a giant Sunwheel, which was put on fire and rolled down a hill to entice the Sun to return. According to one theory, this is the origin of the Christmas wreath.

Another Viking tradition was the Yulelog, a large oak log decorated with sprigs of fir, holly or yew. They carved runes on it, asking the Gods to protect them from misfortune. A piece of the log was saved to protect the home during the coming year and light next year's fire. Today, most know the Yulelog as a cake or cheese log rolled in nuts.

Even the Christmas tree goes back to pre-Christian times. The Vikings decorated evergreen trees with pieces of food and clothes, small statues of the Gods, carved runes, etc., to entice the tree spirits to come back in the spring.

Ancient myths surround the Mistletoe. The Vikings believed it could resurrect the dead, a belief based on a legend about the resurrection of Balder, God of Light and Goodness, who was killed by a mistletoe arrow but resurrected when tears of his mother Frigga turned the red mistletoe berries white.

The Yule Goat, (Swedish julbock, Finnish joulupukki, Norwegian julebukk) is one of the oldest Scandinavian Christmas symbols. Its origin is the legend about the Thundergod Thor who rode in the sky in a wagon pulled by two goats. An old custom was for young people to dress up in goat skins and go from house to house and sing and perform simple plays. They were rewarded with food and drink. The Yule Goat at one time also brought Yule gifts. This character was later replaced with "jultomten" (Santa Claus).

Our pre-Christian ancestors would dress up someone to represent Old Man Winter, who was welcomed into homes to join the festivities. Dressed in a hooded fur coat, Father Christmas traveled either by foot or on a giant white horse. Some think that this horse may have been Odin's horse Sleipnir and that Father Christmas was originally Odin, who was often depicted with a long beard. When the Vikings conquered Britain in the 8th and 9th centuries, he was introduced there and became the English Father Christmas.

Today, Viking Yule is celebrated in reconstructed Viking Villages such as Foteviken in Skåne and Jörvik in England, where visitors in December can make Christmas decorations with the Vikings, listen to Viking legends and hang their wishes in Odin's Yule Tree. Viking Yule is also celebrated by Asatruers, who revive the old Nordic religion, called Asatru.

Of course, our Scandinavian forefathers were not alone in celebrating the Winter Solstice. All over the world, and throughout history, people have celebrated the sun's return after the winter with a wide diversity of rituals and traditions. And still are.