all the viking gods 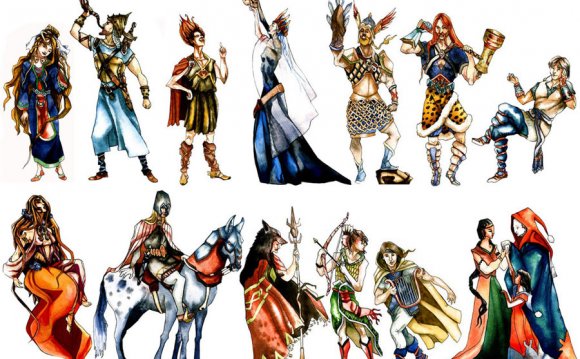 Vikings warriors believed that there were many gods that lived in Asgard and Valhalla.

Viking gods were responsible for a different thing such as war, travel or home.

Valhalla was Viking idea of Heaven for viking warriors only. Vikings had to die in battle first and be escorted by beautiful Valkyries.

Names of Viking Gods and Goddesses

Odin – (Woden, Wotan, Tyr), Thor’ father. Odin was the god of war and also king of gods. He rode an eight legged horse and he often doubted himself and would spend too long trying to decide whether or not to do things.

Thor – god of thunder and the most popular god. He was shot-tempered, a little stupid but very good-hearted. He had the qualities Vikings thought most important: strength and determination.

Freya – was the goddess of love and war. She could turn herself into a bird by putting on a magic falcon-skin. She was the sister of Frey who made sure that the sun shone, rain fell and the crops grew.

Baldur – God of peace. A champion of goodness, innocence and forgiveness, he was loved by everybody. But news has just reached us that he was killed by LOKI. He may be brought back to life.

Fenrir – a wolf monster son of LOKI who turned rather nasty and had to be bound over to keep the peace with a magic chain. Even then he managed to bite off Tyr’s hand.

Tyr – started off as a fearless Germanic God of War, and became ODIN’s left hand man when the Vikings came along.

Loki – a half god, half fire spirit. He caused the other gods lots of trouble. He was a pretty damn troublemaker.

Asgard – is one of the Nine Worlds and is the country or capital city of the Norse Gods surrounded by an incomplete wall attributed to a Hrimthurs riding the stallion Svadilfari, according to Gylfaginning. Valhalla is located within Asgard. Odin and his wife, Frigg are the rulers of Asgard.
Valhalla – Viking heaven, is a majestic, enormous hall located in Asgard, ruled over by the god Odin. Chosen by Odin, half of those that die in combat travel to Valhalla upon death, led by valkyries, while the other half go to the goddess.

In Valhalla, the dead join the masses of those who have died in combat known as Einherjar, as well as various legendary Germanic heroes and kings, as they prepare to aid Odin during the events of Ragnarok.

After three terrible winters of bitterness and conflict, Skoll will eat the sun and his brother Hati will scoff the moon. Three cocks will crow (or is that three crows will cock?) and HEIMDALL will finally blow his awesome horn, bringing the Gods to the final battle.

Valkyria (chooser of the slain), valkyries is one of a host of magical ladies who decide who will die in battle. The valkyries bring their chosen to the afterlife hall of the slain, Valhalla, ruled over by the god Odin, where the deceased warriors become einherjar. There, when the einherjar are not preparing for the events of Ragnarök, the valkyries bear them mead. Valkyries also appear as lovers of heroes and other mortals, where they are sometimes described as the daughters of royalty, sometimes accompanied by ravens, and sometimes connected to swans.