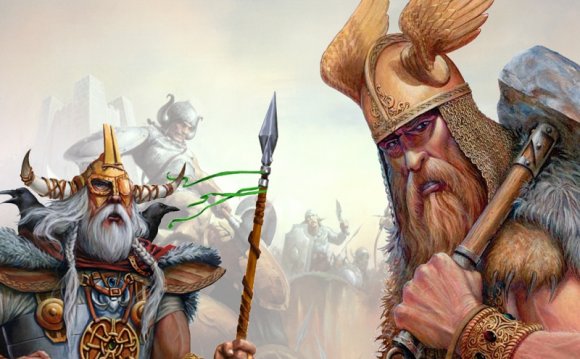 The Norse deities came in two flavors, the Vanir and the Aesir. The Vanir were the older, fertility gods; they included Freyr, Freya, and Njord. The Aesir were more modern, warlike gods, which included Odin and Thor. The Norse told a story of a war between the Vanir and the Aesir after the creation; the deities formed a truce and exchanged members with the result that they fused together and were thereafter collectively known as Aesir. Scholars think this story describes a time when two cults struggled against one another and, ultimately, merged into one.

Before the Vikings started rampaging around Europe, their ancestors, the earlier Germanic tribes, held sway on much of the continent. They had their own collection of mythical figures, many of whom turned into Norse deities when the time came. That’s why the names of German and Norse gods seem so similar and why lots of characteristics of the gods and stories get repeated. Many characters are essentially the same with slightly different names. For example, Odin was Wodan in German; his wife Frigg was called Freya.

An odd thing about the Norse deities — they weren’t immortal. They could and did die, unlike the Greek immortals who lived up on Mount Olympus. Their interests weren’t the same as those of humans; they helped and hurt people as they chose. The deities existed to battle the monsters and the outer darkness, and part of their interest in people was gathering enough warriors to help them fight the last battle.

If the stories about them are anything to go on, the Norse gods spent most of their time wandering around with each other looking for interesting things to do. They didn’t have daily jobs, so if they disappeared for a few days it didn’t much matter.

Odin was the king of the gods. He was the father of most of them and in some accounts created everything — heaven and earth and humans; this accounts for his nickname, “Allfather.” He had a special high seat called Hlidskjalf, from which he can see everything in all the worlds. Only he and his wife Frigg were supposed to sit up there, but occasionally other deities snuck up there when no one was looking.

Odin was immensely wise, but his wisdom didn’t come cheaply. He bought a drink from a spring of wisdom at a high price: one of his eyes. This drink made him want more wisdom, so he spent nine days hanging from the tree Yggdrasill, pierced by a spear, to get even wiser; during this experience, he symbolically died and was reborn. Odin apparently was embarrassed by his empty eye socket, because he usually covered it up with a broad-brimmed hat or a deep hood — whenever an old man with a deep hood strides into a saga, it’s pretty easy to identify him as Odin.

People who worshipped Odin practiced human sacrifice, which they accomplished by hanging their victims from a tree and piercing them with spears. To gain wisdom, Odin died in the same manner as his sacrificial victims and was reborn. The story of Odin’s hanging on Yggdrasill has several elements in common with Christ’s crucifixion, but scholars don’t think the Norse poets were especially influenced by the Christian story.

Odin was god of war and battle, a role that he inherited from the two older Germanic war gods Wodan and Tiwaz. He loved to stir up war among humans. Slain warriors got to go party in his hall, Valhalla; they were brought up there by the Valkyries, warrior women who chose only the most heroic for this honor.

Odin was also the god of poetry, perhaps one reason why he appears in so many poems. He was responsible for bringing the magical mead of poetry to Asgard (a mighty fortress high above where humans lived). A giant had stolen this mead and sent his daughter to guard it. Odin burrowed into her cave in the form of a snake and then turned back into his handsome self. He spent three days and nights with her, after which he sucked down all the mead and held it in his mouth. He turned into an eagle, flew back to Asgard, and spit out the mead into a pot, where all the deities could use it.

Thor was the son of Odin and Earth. While Odin stood for violence and war, Thor represented order — he was the god people called on if they wanted stability. He was immensely strong and manly. He carried around a huge hammer, called Mjölnir, which he used to keep the giants in line — no matter how far he flung it, it always returned to his hand (like a boomerang), and he could make it small enough to hide inside his shirt. He had a bushy red beard, a huge appetite, and a quick temper, though he didn’t stay angry for long. He was the patron of peasants. Thor was also god of thunder and lightning — the wheels of his chariot made thunder, and lightning came from a whetstone lodged in his skull.

Once, the king of the frost giants stole Thor’s hammer. He refused to give it back unless he could have Freya for his wife. The gods agreed, but then they tricked the giant. Thor dressed up as a bride and Loki as his bridesmaid, and the two of them went to the giants’ hall. The giants invited them to sit down at the table, and Thor proceeded to devour all the food and drink all the mead in a most unbridal manner. Loki claimed that “Freya” hadn’t eaten in days, so excited was she about her wedding. Captivated, the giant king called for Thor’s hammer so that they could swear their marriage vows on it. Thor instantly grabbed it, ripped off his veil, and killed all the giants at the feast.

Norse women had the same legal rights as men, and they were a fairly tough bunch. Outspoken women appear in many poems. Goddesses, too, have minds of their own and were equal to the gods. Unfortunately, few poems survive in which goddesses play a large role.

Freya was goddess of love and of lust. Every male who saw her wanted to have sex with her, and many of them did. She was fabulously beautiful, simply dripping with gold jewelry. When she cried, she wept tears of gold; after a particularly long fit of weeping, the floor would be covered with gold. (This happened fairly often, because she was always being promised in marriage to some horrible creature or other.) She owned a falcon skin, which she used to turn herself into a bird for occasional visits to the underworld.