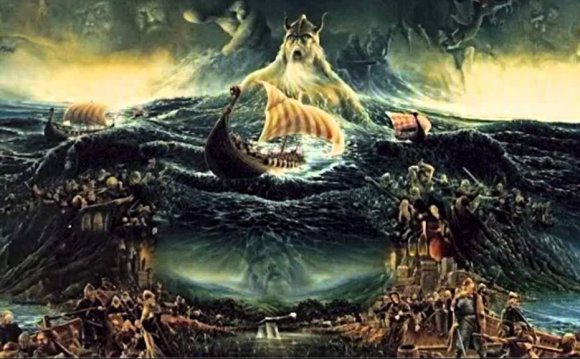 Jotunheim (Old Norse: “Jötunheimr or Útgarðr”) is the home of the giants (also called Jotuns). They are the sworn enemies of the Aesir. Jotunheim consist mostly of rocks, wilderness and dense forests, so the giants lives from the fish in the rivers, and the animals in the forest, because there is no fertile land in Jotunheim. The whole world was created from the corpse of the first giant, named Ymir. It was Odin and his brothers Vili and Ve, who killed Ymir.

The giants and the Aesir are constantly fighting, but it also happens from time to time, that love affairs will occur. Odin, Thor and a few others, had lovers who were giants. Loki also came from Jotunheim, but he was accepted by the Aesir and lived in Asgard. Jotunheim is separated from Asgard by the river Iving, which never freezes over. It lies in the snowy regions on the outermost shores of the ocean. Mimir’s well of wisdom is in Jotunheim, beneath the Midgard root of the ash tree Yggdrasil. The stronghold of Utgard is so big that it is hard to see the top of it. And there the feared Jotun king Utgard-Loki lives. Utgard is carved from blocks of snow and glistening icicles