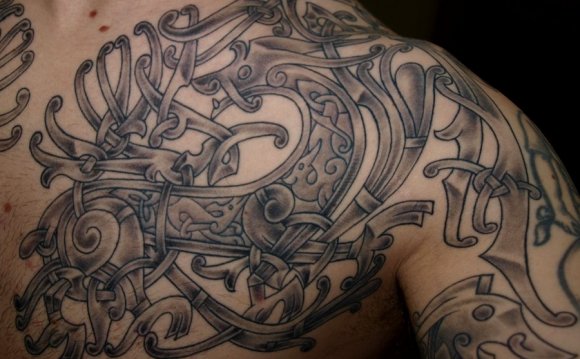 Did the Vikings have tattoos? One piece of historical evidence says yes, at least those Swedish Vikings who raided and traded through Russia probably.

The Vikings themselves issued few literary works, so we are forced to rely on outside accounts. Many come from Arab statesmen, who carried on extensive trade and cultural exchange with Norsemen in the ninth and tenth centuries.

An Arab traveler, Ahmad Ibn Fadlan, a scholar of Baghdad, was sent by the Abbasid Caliph on a diplomatic mission to the Bulgars in the Middle Volga area of Russia. He first met the Norse warriors as he travelled across Russia’s vast steppes, meeting them as they sailed their longships down the Volga river and looking to trade with the Arab world — by far the wealthiest civilization in Western Eurasia, particularly as Europe struggled to consolidate in the centuries following the collapse of the Roman Empire. While there in A.D. 921, he met a people called the Rus, Swedish Viking traders, who had brought slaves to sell at the markets.

“I have never seen bodies as nearly perfect as theirs, ” he wrote. As tall as palm trees, fair and reddish, they wear neither tunics nor kaftans. Every man wears a cloak with which he covers half of his body, so that one arm is uncovered. They carry axes, swords, dagers and balways have them to hand. They use Frankish swords with broad, ridged blades.”

At one point he mentioned that all the men were tattooed from the tips of their fingers to their necks. The tattoos were dark green figures of trees and symbols. It is likely, however, that the tattoos were probably dark blue, a color that comes from using wood ash to dye the skin. While Ibn Fadlan describes the tattoos as trees, he could have see the Vikings trademark gripping beast or other knotwork patterns of which the Vikings were fond. To him they resembled the women’s neck rings of gold and silver.

Furthermore, the description of tattoos may have been less an eye-witness account than a rhetorical device used by Arabs to depict the savagery of the Norsemen. They considered them with a combination of horror and fascination. Ibn Fadlan had harsh words for their hygiene: “They are the filthiest of God’s creatures, ” he observed. Although he acknowledged that they washed their hands, faces and heads every day, he was appalled that they did so “in the dirtiest and filthiest fashion possible” in a communal basin of water. This was an ancient Germanic custom that caused understandable revulsion in a Muslim who typically performed ablutions only in poured or running water.

Traveling in Europe at the same time was Ibrahim Ibn Yacoub Al- Tartushi, representing the Muslim kingdom of Al Andalus in Spain. Reaching a border town between Germany and Denmark, he was not impressed by the dirty market town, a far cry from the beauty and elegance of his native Cordoba.

He described Viking society as one in which women could divorce freely—“they part with their husbands whenever they like”—and where both sexes wore “artificial eye make-up.” Worse of all was their singing: “I never heard any more awful singing than the singing of the people in Schleswig. It is a groan that comes out of their throats, similar to bark of the dogs but even more like a wild animal.”

This is rather slight evidence on which to state categorically that Vikings tattooed themselves. The Arabic word used in the original text for “tattoo” was more commonly used to describe mosque decorations rather than actual tattoos— a fitting description considering similarities between a mosque’s geometric patterns and those of a runic Viking tattoos. Also, tattoos are not mentioned in any of the sagas or poetry, although these literary works describe many other physical characteristics such as scars or hair color.

Unfortunately, human skin does not survive centuries of burial. However, a Scythian chieftain was found in Siberia who had been buried circa 500 B.C. He had been buried beneath the permafrost, so his skin and tattoos survived. While this find predates Viking traders in Russia by 1300 years, it is possible that Vikings could have met the descendants of the Scythians while on trading missions in Russia and learned the tattooing art from them. The Scythian warrior’s tattoos had Scythian art styles, of course. If Vikings did have tattoos, it is likely they would have used Norse designs and symbols found in their other artwork on bone carvings or jewelry.

For a more “modern” example, the ancient mummy of a mysterious young woman, known as the Ukok Princess, was found 2, 500 metres up in the Altai Mountains in a border region close to frontiers of Russia with Mongolia, China and Kazakhstan. The remains of the immaculately dressed ‘princess’, aged around 25 and preserved for several millennia in the Siberian permafrost, were discovered in 1993 by Novosibirsk scientist Natalia Polosmak. Her colourful body artwork is seen as the best preserved and most elaborate ancient tattoos anywhere in the world.

The tattoos on the left shoulder of the ‘princess’ show a fantastical mythological animal: a deer with a griffon’s beak and a Capricorn’s antlers. The antlers are decorated with the heads of griffons. And the same griffon’s head is shown on the back of the animal.

The mouth of a spotted panther with a long tail is seen at the legs of a sheep. She also has a deer’s head on her wrist, with big antlers. There is a drawing on the animal’s body on a thumb on her left hand.

“Tattoos were used as a mean of personal identification – like a passport now, if you like. The Pazyryks also believed the tattoos would be helpful in another life, making it easy for the people of the same family and culture to find each other after death, ” added Dr. Polosmak. “Pazyryks repeated the same images of animals in other types of art, which is considered to be like a language of animal images, which represented their thoughts.”

Many tattoo artists have designed Viking tattoos, which can be easily found in many places online. Popular Viking tattoos include the compass tattoo, called the Vegvisir. This symbol is not from the Viking Age, however; it dates to the 17th century, from an Icelandic book on magic. Another popular Viking design for a tattoo is the Helm of Awe or aegishjalmur. This symbol allows the wearer to strike his enemies with fear and confusion. It is also thought to grant magical powers to its wearer.

For more information on other counter-intuitive facts of ancient and medieval history, see Anthony Esolen’s The Politically Incorrect Guide to Western Civilization ©