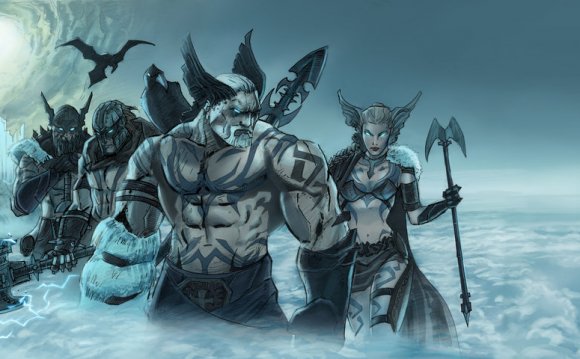 On April 4, Twitter user Shinobi602, who has previously leaked accurate information on games, tweeted "to the halls of Valhalla. My Boy. #GodofWar4."

In response, NerdLeaks did some digging and found its way to a website belonging to former Sony Santa Monica artist Finnian Macmanus. A private section of the website contained artwork featuring a character that looks similar to series protagonist Kratos. The figure has Kratos's iconic red body tattoo and can be seen in various Norse mythology-inspired environments.

The NerdLeaks website has now been taken down and Imgur archives of the picture are also being removed. They are however still available to see on NeoGAF.

As previously stated, Sony has not officially announced a new God of War yet. These images may be entirely unrelated, or represent an idea it was exploring but may not pursue.

The last entry in the God of War series was Ascension, which was released for PlayStation 3 in 2013.

"No, it doesn't quite reach the audacious and rage-filled moments of God of War: Ascension's predecessors, nor does it move the series forward in any way, but it's skilfully put together, and wonderfully satisfying to play, " said GameSpot's review.

"The mix of Greek mythology and lurid schoolboy fantasy still manages to simultaneously charm and gross out all at once, and that's a trait few games can boast, let alone execute with such confidence."