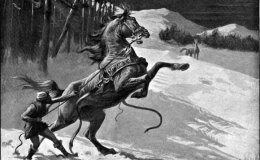 The daughter of LOKI and ANGRBODA, she’s an ugly half-dead hag with gangrene legs and a hideous face. Which just shows that sometimes you can judge by appearances.

Having been banished to the Underworld by order of ODIN — merely for being the ugly evil daughter of LOKI — she made the place her own and became HEL of the HELHEIM Hell Hall. Which tends to become hellishly confusing.

Yes, her name gives us the word ‘Hell’, but her domain is almost the complete opposite of SATAN’s abode: it’s cold, damp, and populated by the kind of apathetic souls most devils would hardly feel worth the trouble of roasting. In fact most souls go to HELHEIM because they’ve spent their lives sitting on their asses instead of killing, pillaging and then singing rude songs about it.

It’s a melancholy and depressing place filled with gloomy pessimistic spirits. Which is why HEL is also Goddess of the Blues. Half her body is blue and the words associated with her say it all: dank, clouds, hunger, tardy feet, splendid misery...