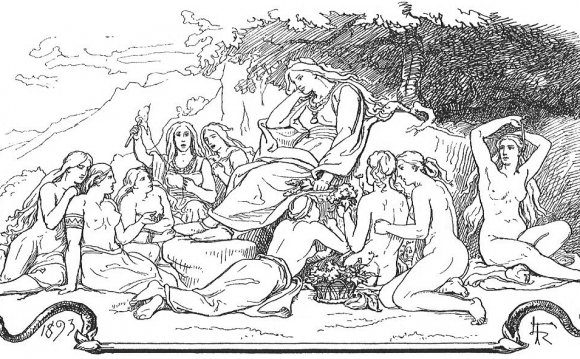 Norse deities can be divided into two major groups; the Aesir and the Vanir. The Aesir lived in Asgard, one of the Nine Worlds of Norse Mythology. The Aesir (Æsir) are mainly associated with order, justice, wisdom, war, and agriculture. Odin is the High God of the Aesir. Other key Aesir gods include Thor, Balder, Frigga, and Týr. The Vanir lived in Vanaheim, another of the Nine Worlds. The Vanir are mostly associated with fertility, presiding over the earth and sea, and the natural forces of the world, including magic, and the ability to see the future. Key Vanir gods include Freyja, Freyr, and Njord. There were many Aesir-Vanir wars, the last of which resulted in an Aesir victory, after which Freyja, Freyr, and Njord came to live in Asgard as an act of good will.

In Anglo-Saxon paganism, the Aesir are referred to as Ēse and the Vanir as Wēn. There was a complex relationship between Germanic/Teutonic, Scandinavian, and Anglo-Saxon deities, with many similarities between them given the cultures mixed heavily before and during the Viking Age (the ninth to eleventh centuries). Many of these deities could be described as Anglo-Scandinavian as a result. The Scandinavian Vikings predominantly worshipped Odin, Thor, and Týr. The Saxons centered their worship on Wōden (Odin) and Thunor (Thor), while the Angles primarily worshipped Ing/Ingui (Freyr). However, to say one was precursor to another would be a generalization, as all seem to be a result of a complex cultural interchange, constantly evolving. (The deities of the Anglo-Saxons)

– Goddess of springtime, the dawn, purity and rebirth. Written about by Bede, namesake of Easter. Associated with Idunn.

(Norse), Fréo (Anglo-Saxon) – Goddess of love, fertility, war, divination and magic. ‘The Fair One’, ‘Mistress of the Slain’, ‘The Lady’. Ruler of the Valkyries. Associated with elves and the goddess Idunn. Twin sister of Freyr/Ing, daughter of Njord.

Frige (Anglo-Saxon) – Goddess of love, marriage, motherhood and the household. Wife of Odin/Wōden. Namesake of Friday.

Fulla (Norse, Anglo-Saxon) – Goddess of plenty, and the moon. Handmaiden of Frigg/Frige.

Gearde (Anglo-Saxon) – Goddess of the fields, ‘Lady of the Walled Garden’.

Gefion, Gefjon (Norse) – Goddess of plenty, agriculture, and the plough. Associated with Frigg and Freyja. Could also be Rheda/Hretha.

– Goddess of the dead and underworld, ruler of the Land of Mist, Helheim. Daughter of Loki.

Idunn/ Iðunn (Norse) – Goddess of vitality and health, said to keep the apples that grant the gods with eternal youthfulness. Associated with Ēostre.

Nerthus/Nerðus, Hertha (Anglo-Saxon) – Goddess of the earth and fertility, Earth Mother. Associated with Jord. Could also be Njord.

Njord/Njörðr (Norse) – God of the sea. Father of twins Freyja/Fréo and Freyr/Ing. Married to Skadi. Could also be Nerthus.

– Chief of the Norse gods, ruler of the Aesir. God of war, death, wisdom and magic. ‘All Father’. Ruler of Valhalla. Husband of Frigg/Frige, father of Thor. Namesake of Wednesday. Could also be Wod.

Rheda, Hretha/Hreðe (Anglo-Saxon) – Goddess of victory, the ‘Glorious One’. Written about by Bede. Could also be Gefion.

Seaxnēat, Saxnot (Anglo-Saxon) – God of the Saxons, the family, battle and nobility.

– Goddess of winter, snow, mountains and hunting. A female jötunn (giant). Associated with Ullr and Njord.

– God of thunder and lightning, strength and protection. Possessor of the mighty hammer Mjölnir. Son of Odin and Jord, husband of Sif. Namesake of Thursday. Linked to the Teutonic god Donner or Taranis.