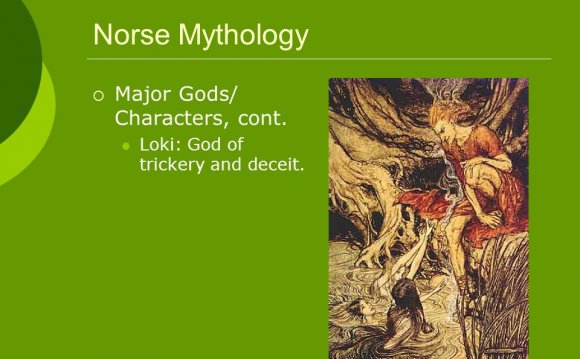 Brage is very wise and eloquent, and the god of skaldic poetry and prose. (Drawing by: Carl Wahlbom)

In the beginning there were only native forests and wasteland. The Aesirs, one main group of Norse gods, cleared places to stay, both for themselves and the humans. They named the human’s home Midgard – because it is placed in the middle of the world. And in the middle of Midgard – so that the humans should not feel lonely and abandoned – the gods built a place for themselves: Asgard.

Asgard is a huge castle surrounded by thick walls. To get there you have to ride over the rainbow Bifrost. Strong defenses were built around Midgard as protection against the wild and unknown outside where dark and sinister forces are raging. There – in Utgard and Jotunheim – giants and trolls live. Everything is arranged like tree-rings. And furthest out, in all directions, is the vast world ocean where the Midgard Serpent lives.

The female gods in Norse mythology are called Asynja. The main goddess is Frigg.

Odin is the Allfather of the Norse gods and the ruler of Asgard. (Illustration: Victor Villalobos)

Odin is king of the Aesirs, but Thor is probably the one most worshiped. There are many interesting stories about Thor, while Odin mostly is depicted as a wanderer in search of wisdom and knowledge.

Here is a description of the twelve most important gods, and the main goddess Frigg:

Odin (Old Norse: Óðinn) is the most powerful and wisest god. Odin is the Allfather of the Norse gods and the ruler of Asgard.

Thor (Old Norse: Þórr, Thórr) is Odin’s youngest son and the second most powerful god. He is the god of thunder, master of the weather and the strongest warrior.

Vidar (Old Norse: Víðarr) is son of Odin and the giantess Grid, and only beaten by Thor when it comes to strength.

Vale (Old Norse: Váli) is the son of Odin who was bred as avenger of Balder by raping the giantess Rind.

Brage is very wise and eloquent, and the god of skaldic poetry and prose.

Heimdall is the guardian of Bifrost, the rainbow bridge between Asgard and Midgard, which is the main road into the heavenly kingdom .

Ty, or Tyr, is the god of war – the one who decides who win battles.

Njord (Old Norse: Njǫrðr) is the god of the sea and seafarers.

Froy (Old Norse: Freyr) is the god of fertility. Frey is associated with virility and prosperity, with sunshine and fair weather, and is often depicted with a large phallus.

Ull (Old Norse: Ullr) is the son of Sif, Thor’s wife. “Ull” means “the honorable, ” and he was the best of all archers and skiers.

Forseti is the god of justice.

Frigg (Old Norse: Frigga) is Odin’s wife, extremely beautiful, the foremost among the goddesses and the queen of Asgard. She is goddess of love and fate, described as having the power of prophecy yet she does not reveal what she knows.