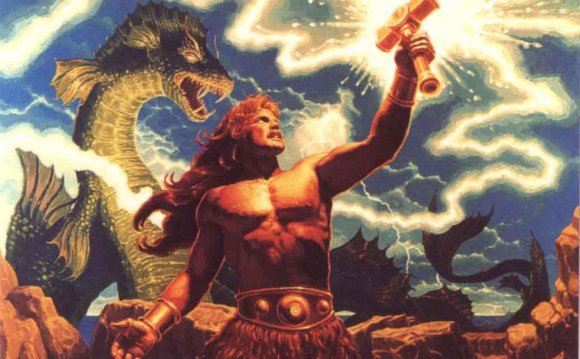 The Norse are a culture in .

Unlike the other cultures, the Norse have two 'villager' units: Gatherers and Dwarves. Gatherers gather resources at the same rate as Greek Villagers and are very similar to them in most respects. Dwarves, meanwhile, cost gold to train instead of food, mine gold 20% faster than Gatherers and gather food and wood 20% slower. However, Thor's dwarves gather food and wood only slightly slower than gatherers. Neither gatherers nor dwarves can build any buildings except Farms; the other buildings are built by Norse infantry.

While other cultures build resource-specific drop-off buildings, the Norse have the Ox Cart, a unit and mobile resource drop-off site. Ox Carts can simply follow gatherers and dwarves wherever they go, saving building time. All resource-related technologies are researched at ox carts. Norse players start the game with one ox cart and can train additional ones at the Town Center .

Similarly to the Egyptians, the Norse have a specific hero class: Hersirs, which can be trained in any number. They are powerful against myth units but only modestly effective against human soldiers. By worshiping the minor god Baldr, the Norse can use the Ragnarok god power to instantly turn all their gatherers and dwarves into Heroes of Ragnarök, which are essentially stronger versions of the Hersir.

In the campaign, the Norse have five unique heroes: The hermit Skult, the Valkyrie Reginleif, the two dwarven heroes Eitri and Brokk and, in the expansion, the Frost Giant Folstag.

The Norse gain Favor by causing damage to units and buildings. The more units there are doing this, the faster favor is generated. Hersirs also passively generate a trickle of favor, and gain twice as much favor through battle as other units. A small amount of favor can also be gained by attacking huntable animals. Raiding is the best way to gain favor early on without losing too many soldiers.

The Norse military is dominated by infantry. These units can also build buildings, allowing Norse players to use part of their attacking force to build a forward base near their opponent’s town, quickly create more units nearby then attack. While many of the infantry of the other cultures target cavalry, certain Norse infantry units counter other types of units. The Throwing Axeman is a short-ranged infantry unit that deals bonus damage to other infantry units and the Huskarl gains a bonus against archers.

Originally, the Norse had no archers (the anti-infantry role was taken by Throwing Axemen and Ballistae), so there was no need to train anti-archer units when fighting them. As the Norse have no ranged heroes, they were particularly vulnerable to flying myth units. This was addressed in the Titans expansion, which granted the Norse the Axe of Muspell technology, which causes Throwing Axemen to deal extra damage to flying units. In, the Norse gained the Bogsveigir, an archer good against flying myth units.

The Norse also don't have a dedicated ranged siege unit such as the Greek Petrobolos and the Egyptian Catapult . Instead, they have the Portable Ram, a cheap melee siege unit that can be vulnerable to infantry and cavalry as it lumbers up to the buildings it attacks, and the Ballista, a ranged unit that does respectable damage to buildings but is much better against infantry and archers. To compensate for this, many Norse myth units also deal crush damage, particularly the Mountain Giant .

Icelandic is the living language closest to Old Norse, which the Norsemen spoke. All translations are approximate.

Vanilla and the Extended Edition

These names only appear on AI players following the Big Boomer or the Aggressive Rusher AI.

These names only appear on AI players following the Balanced or the Vanilla Random AI.