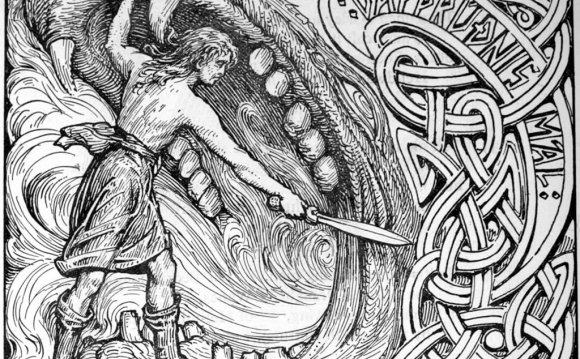 The only two original sources of Norse mythology are two Icelandic texts, the Elder Edda (first written around a.d. 1300 but containing earlier tales) and the Younger Edda (written by Snori Sturluson at the end of the 1100s). The Norse myths are bleaker than the Greek and Roman tales. Norse gods live in a high plane called Asgard, where they await the inevitable doom that faces them in the battle that will end the world—a reflection of the pessimistic Norse belief that good will eventually lose to evil. Heroism exists, defined by fighting for good in the face of certain defeat and dying in the attempt. Dead heroes are honored in Valhalla, the afterlife for good warriors, where they sit with gods in Asgard who, like them, face defeat in the end.

Summary: Chapter I — The Stories of Signy and Sigurd

The Volsung dynasty’s story is told in the Volsungasaga as well as in the Elder Edda. Signy, a daughter of Volsung, marries an evil man who kills her father, then imprisons and kills all her brothers except Sigmund, whom she is able to rescue. To procure Sigmund a comrade for the vengeance they are planning, Signy disguises herself and spends three nights with her brother and conceives a child. While the boy, Sinfiotli, grows up, Signy keeps quiet and pretends to love her husband. When Sinfiotli comes of age, he and Sigmund kill Signy’s husband and all his children by burning them in a locked house. Seeing her wish done, Signy herself walks into the burning building to die with the family she has killed.

Sigmund later has a son named Sigurd, who braves a ring of fire to free the imprisoned maiden Brynhild, a Valkyrie who has disobeyed Odin, the lord of the gods. Sigurd and Brynhild pledge their love for each other. He leaves her in the same ring of fire, intending to return, and visits his best friend, the king Gunnar. Gunnar’s mother, who wants Sigurd to marry her own daughter, Gudrun, gives Sigurd a potion that makes him forget Brynhild.

Gunnar decides he wants Brynhild for a wife, but he is unable to pass the marriage-test of the ring of fire. Sigurd rides through the flames again disguised as Gunnar and wins Brynhild for his friend. Brynhild marries Gunnar, thinking he legitimately passed the test and assuming Sigurd abandoned her. When she learns the truth, she falls into a rage of vengeance and falsely convinces Gunnar that Sigurd slept with her when he rescued her from the ring of fire. Gunnar persuades his younger brother to kill Sigurd. After Sigurd’s death, Brynhild kills herself, asking to be placed on the funeral pyre next to him.

Odin, the chief Norse gods, rules Asgard from Gladsheim, his palace, attended by the Valkyries and leading the gods in their constant battle against the Giants of Jotunheim. A strange, taciturn god, Odin eats nothing himself but gives his food to his two pet wolves under the banquet table. His two ravens, Thought and Memory, scour the world for news, on which he meditates while the other gods feast. Concerned with wisdom, Odin once gave up one of his own eyes and hung for nine days and nights from a tree in order to gain it. Odin gives this wisdom, along with the Runes—the old Norse written alphabet that has magical powers—and the special liquor that transforms its drinker into a poet, to the race of men.

There are five other great gods besides Odin: Balder, Thor, Freyr, Heimdall, and Tyr. Thor is the thunder-bearer and strongest of the gods; Freyr is the god of the crops; Heimdall is the guardian of the rainbow-bridge between Asgard and the world of men; and Tyr is the god of war. There are three major goddesses—Frigga (Odin’s wife), Freya, and Hela—but they are not important to Norse myth. Frigga is an indistinct figure, a spinner of secret thread; Freya, like Aphrodite, is a goddess of love; and Hela is queen of the underworld.