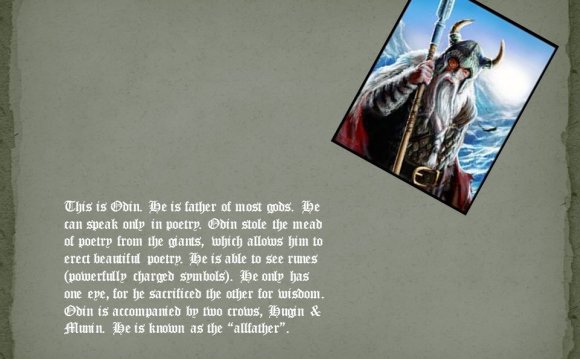 However, if you don’t want to know which god in particular, stop reading now.

Who is Mr Wednesday?

Shadow’s new boss is Odin – King of the Gods.

“Wednesday is my day, ” he tells Shadow by way of introduction. This is the first big clue that Shadow is dealing with a god, because the day Wednesday or “Wodensday” is named after Odin, who also goes by the Old Saxon name Wodan. In Old Norse he’s called Oden, which has become Onsdag (Wednesday) in modern Scandinavian countries.

What is Odin’s history?

Odin, who is widely revered in Germanic and Norse mythology, is the god of war, wisdom, poetry, magic and death. He is the All-Father of the Nordic Gods.

His two ravens are Huginn and Muninn – Thought and Memory – who tell him all the things happening around the world. He also has the wolves Geri and Freki. His spear is named Gungnir. In some stories he’s married to Frigg (a goddess) and Jord (the Earth) and he has many sons. His eldest son is sometimes known as Thor.

You may have noticed that one of his eyes is a little different. That’s nothing to do with McShane: it’s actually a glass eye, because Odin gave his real eye in exchange for a drink from the Well of Wisdom.

Odin is usually shown as long-bearded, with a cloak and a big hat. But this is the 21st century, so Mr Wednesday gets to wear a suit and shave his beard off and sometimes wear a little sunhat to protect his weathered face.

You will find Odin all over the place in the history of Europe and Scandinavia. He is widely revered in Germanic and Norse mythology, and you can trace him all the way back to the Roman occupation of Germania and the Viking Age. You’ll spot him in Old Norse literature from the 13th century and in pagan mythology.