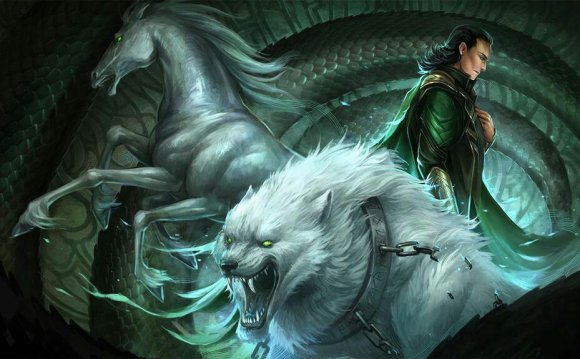 The Norse trickster god, Loki is undoubtedly the most debated figure from Norse mythology to this day. Though he appears to be a scheming, mischievous deity who has no real loyalties, scholars still explore what his purpose might have been in the ancient stories. Was he merely a plot device, a foil for the AEsir, the pantheon of gods in Norse religion? His character surely meant more to the non-Christian Scandinavians than can be gleaned now, and though that purpose cannot be fully realized due to a lack of sufficient sources, an overview of who Loki was and what he did can loosely be outlined.

According to Gylfaginning in the Prose Edda , Loki was the son of Fárbauti, a jötunn (giant), and Laufey, a lesser known female god. His jötunn heritage does aid in explaining the complexity of his character, as the jötunns once went to war against the AEsir and are considered, in many ways, their enemies. Loki, as the son of a giant as well as a goddess, straddles the two warring factions, a trait which plagues his character throughout his mythology. He marries the minor goddess Sigyn, but has many affairs, his most notable with the giantess Angrboða, by whom he gives birth to Hel, the queen of Niflheim; Fenrir, the oversized wolf who is fated to kill Odin at Ragnarök; and Jörmungandr, the World Serpent banished to the seas. The trickster god also, interestingly enough, is the mother of Odin's great eight-legged steed Sleipnir, as Loki mated with a powerful male stallion while disguised as a mare. As his parentage and his progeny are all outside the normal state of affairs even in the godly world, scholars believe that there must have been pertinence to his connection to so many dark and powerful figures in the Norse pantheon.

Loki's relationship with the other gods is what causes most of the concern and confusion in modern scholarship. Loki is not shown as an outright evil god, though he does appear to take great pleasure in fooling or insulting the AEsir. One of the most notable examples is his fluctuating relationship with Thor, as recorded in two different poems both from the Codex Regius, which houses the Poetic Edda . "Lokasenna" tells of when Thor comes to the great hall of the sea god AEgir and immediately becomes bothered by Loki and his antics. Three times Thor threatens to silence Loki with his hammer Mjölnir, and three times Loki proceeds to insult him and Odin. At the end of the tale, Loki flees the scene, hiding from the AEsir for his harsh words, only to be found and captured, and bound to the rock where he will remain until Ragnarök.

A depiction (1895) of Loki quarreling with the gods, as in the Poetic Edda poem Lokasenna. Public Domain

For his mischief, Loki is hounded by the gods and bound to a rock where a serpent drips painful venom upon him. There he lies till Ragnarok. Painting illustrating Loki and Sigyn from Norse mythology. Public Domain

"Þrymskviða", contrastingly, details Thor and Loki on friendlier terms, as it is Loki to whom Thor turns for aid when Mjölnir, his powerful hammer, goes missing. Loki is the first person Thor seeks out, and together they work to uncover which god or magical creature has stolen the weapon. Loki goes out of his way to travel to Jötunheimr, the home of the giants, to ask the jötunn Þrymr what he knows, only to uncover Þrymr himself has taken Mjölnir and will only return it if Freyja will agree to marry him. In this tale, Loki and Thor retrieve the hammer with a clever plan of disguise, and Þrymr is punished for his misdeeds.

Though these are only two of many stories that describe Loki, these tales regarding his association with Thor reveal the wide spectrum of his personality and thus why his portrayals in the ancient Norse sagas constantly conflict. Just as modern scholars do not fully understand Loki's role, the Christian authors who finally wrote down the oral tradition did not seem to comprehend him well enough to know how to describe him either. Although Loki is neither depicted as completely evil nor completely helpful, he will fight against the Æsir during Ragnarök and eventually kill and be killed by Heimdall, the god who guards the rainbow bridge Bifröst which leads to the world of mortals. Loki appears to have no regret of his actions or sympathy for his family members—Hel, Jörmungandr, and Fenrir—thereby emphasizing the anomaly of his relationship with the AEsir.