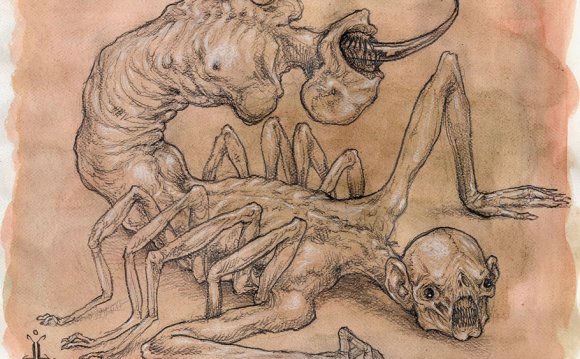 The Scandinavian Folklore consists of a huge variety of creatures, good or evil, which have frightened people for centuries. They were often meant to scare children, but even today they are essential and important to the modern northern society. In the 1890s, something changed in the way common Scandinavians saw themselves and their culture. They looked back in time to rediscover their old myths and legends; folklore which had been forgotten because of the coming of Christianity. It was a time when people feared nature, because we were becoming more industrialized. The forests, the mountains, and the sea – it all seemed strange, dark and magic, and because of that, we are now left with evil spirits and monsters who used to represent our own way of seeing nature.

Huldra (or called Tallemaja in Swedish) is a troll-like woman living in the woods. She is fair and beautiful, but wild and has a long cow-tail which she hides behind her back upon meeting a human. It is said that Adam and Eve had many children, and that one day, when Eve was giving her children a bath, God came to visit. Eve had not finished bathing all of her children, and so hid those who were still dirty.

God asked: “Are there not more children?” and when Eve said no, God said: “Then let all that is hidden, remain hidden, ” and the hidden children became De Underjordiske (the ones living underground), lost souls who live under the surface of the earth, calling for someone to be with them, usually human passersby. Huldra was one of them, but she somehow remained above the ground. She is a flirtatious, young girl who is neither good nor evil.

These beings are actually still very important in the modern society. In the Scandinavian Christmas tradition, there is no Santa in the shape of a fat, bearded guy who lives at the North Pole. Instead, we each have our own Nisse, living in the barn (that is to say, if you are a farmer, or living in the countryside), who is like a guardian for the household. These creatures are typical pranksters, but can easily be befriended, and around Christmas they have the same function as Santa in Western traditions.

Made famous by J. R. R. Tolkien, the dwarves and the elves originate from Norse Mythology. The dwarves lived in their own part of Midgard; a place no human could find. They were small people, often pictured as little men with long beards, who were master smiths, and made the swords, shields and armor for the gods themselves. The elves lived in a deep forest nearby the castle of Frøy, the god of fertility, called Alvheim. They were fair and beautiful, and commonly seen as peaceful creatures.

Mare is a female Vette, who gives people bad dreams at night by sitting on them in their sleep. She is a common belief in Germanic folklore, and appears in many different shapes. The Scandinavian words for Nightmare, are: Norwegian – Mareritt, Danish – Mareridt, Swedish – Mardröm, which directly translated means Mare-ride, and Mare-dream.

Fossegrimmen, or just Grim (Foss is Norwegian for Waterfall) is a water-creature. He is a young, handsome man who sits naked under waterfalls, playing the fiddle. He plays the music of nature itself; the sound of the water, the wind in the trees, it all comes from his music. He is said to teach humans how to play if they secretly brought him a stolen piece of meat. Torgeir Augundsson (1801-1872), better known as Myllarguten, was a famous fiddle-player from Telemark, Norway who was so good it was rumored he had sold his soul in exchange of Fossegrimmen’s skills.