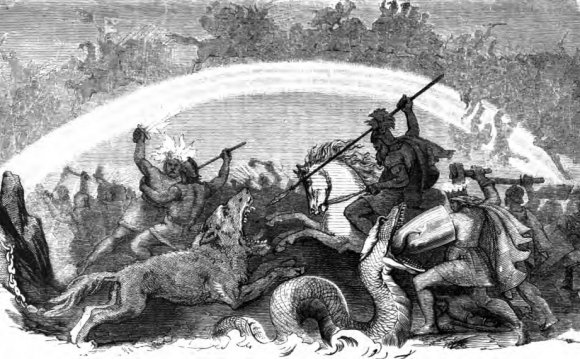 In Norse mythology, Ragnarok is a series of apocalyptic events that will define the end of the world, where giants of frost and fire will together fight the gods in a final battle that will ultimately destroy the planet, submerging it under water. According to the legend, the world will resurface, the surviving and returning gods will meet, and the world will be repopulated by two human survivors.

Brothers will fight and kill each other, sisters' children will defile kinship. It is harsh in the world, whoredom rife —an axe age, a sword age —shields are riven— a wind age, a wolf age— before the world goes headlong. No man will have mercy on another.
Dronke (1997:19)

Norse mythology is divided in two major groups of gods – the Giants (Jotnar), Aesir, and Vanir. The Giants were the ones that came first and lived in in Jötunheimr, one of the nine worlds of Norse cosmology. They were banished there by the Aesir, who refused them entry to their world, Asgard. The Giants frequently interact with the Aesir and the Vanir, usually in opposition to, or in competition with them.

The god Loki was the son of a Giant and was known as a trickster god with the ability to shape shift. His role in Norse mythology is unique and controversial since he appears to both help the gods and hinder them. He was also permitted to live with the Aesir in Asgard. Loki fathered many offspring, including an eight legged horse (Sleiphnir) used by Odin, a dragon, and the wolf Fenrir who plays his role in the apocalyptic Ragnarok.

According to the story, Loki tricked the blind god of winter, Hod (Hoor), an action that resulted in the death of the god Balder , son of goddess Frigg and god Odin. Because of this, he was punished and cast into a cliff where he was to remain bound until Ragnarok, the end of the world. This bears similarities to the punishment of Prometheus in ancient Greek mythology, who was bound to a rock for giving the ability to make fire to humanity.

Like the Christian apocalypse, Ragnarok sets out a series of signs that will ultimately define the end of times. The first sign is the Fimbulvetr, a long and continuous cold winter with constant snow that will last for a year. A red rooster called Fjalar will warn the Giants that the Ragnarok has begun. A second rooster will warn all the dead that Ragnarok has begun. Finally, a third red rooster called Gullinkambi, a rooster that lives in Valhalla, a majestic hall located in Asgard, will warn all the gods about the beginning of the end.