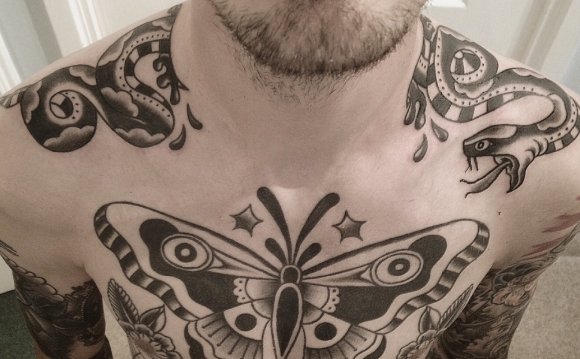 January 2016 will mark 20 years for Pagan Tattoo. Well, back in the first days, we were called Pagan’s Hammer Tattoos. In 2000 we dropped the “hammer" from the name, because everyone just called the shop “Pagan’s” or “Pagan Tattoo”.

As you might imagine, over the years a few people have asked about why we operate under the “Pagan” moniker. So, here’s the long version; back in 1996 the reasons were different than perhaps they are today, and I think our understanding of the term Pagan has grown right along with the creative philosophy that prompted us using it in our name.
In the mid 1990s they was a very strong artistic and aesthetic movement at work within tattoo culture. Namely, the New Tribalism or Modern Primative style was having a big influence on how a sizable portion of the new crop of mid 1990s tattooists perceived their place in the continuum of tattoo history. There was, in that post-grunge era, a recognition by Western born tattooists that our artistic lineage was not limited to the travelling carnivals or the boardwalk tourist towns. Our artistic and spiritual roots went deeper than the bowery paycheque parlours and the port city sailor scratch-houses. Our tattooing was not just the markings of the lost rebel, the biker, and the angry soldier or the whore.

Finally, Western (and especially North American) tattoo culture was emerging out from under the cultural wet blanket of an almost exclusively White and Christian world view, and also escaping the ghetto of low-brow pop culture imagery and the stigma of criminality. True, Japanese tattoo imagery had long been appropriated into Western tattooing, but largely in an ugly way, and very rarely with any respect for its traditions, subtleties and nuances.

A new breed of professional tattooist was becoming aware and becoming avidly interested in their connection to the body adornment traditions of the rest of the world. Notably, it was the full-body tattooing of the Pacific peoples that awakened this interest first. The black inked and intricate, geometric patterns of the Moari, the Somoans, Tongans and Fijians dominated this first wave of tribalism in modern tattooing. The symbolic influence of Borneo and Micronesia soon followed as did the markings and body paint of the various Indigenous peoples of the Americas. It wasn’t long before ethnically European and American artists started to wonder about their own culture’s pre-Christian body adornment traditions. A revival of ancient Celtic, Nordic and Slavic motifs started entering the work flow of most Western Tattoo shops. The tattoos found on the bog-preserved corpses of ancient Indo-European travellers started appearing on the flash sheets of American tattoo parlours.