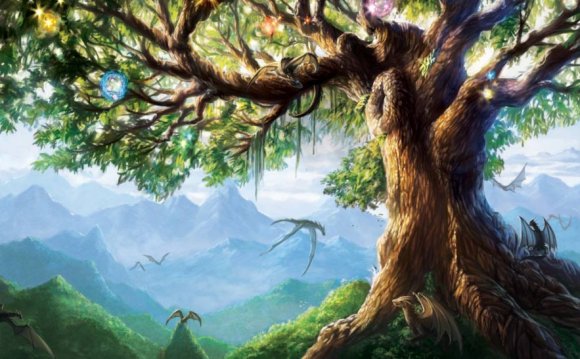 In the middle of Asgard, where the Gods and Goddesses lives, is Yggdrasil. Yggdrasil is the tree of life, and it is an eternal green Ash tree; the branches stretches out over all of the nine worlds in Norse mythology, and extend up and above the heavens. Yggdrasil is carried by three enormous roots, the first root from Yggdrasil is in Asgard, the home of the Gods. Next to this root is a well named Urd’s well. This is where the Gods have their daily meetings.

The second root from Yggdrasil goes all the way down to Jotunheim, the land of the giants, next to this root is Mimir’s well. The third root from Yggdrasil goes down to Niflheim, close to the well Hvergelmir. It is here the dragon Nidhug is chewing on one of Yggdrasil’s roots. Nidhug is also known to suck the blood out of the dead bodies, that arrives at Hel. At the very top of Yggdrasil lives an eagle, the eagle and the dragon Nidhug are bitter enemies, they truly despise each other. There is a squirrel named Ratatosk, and he spending almost the entire day, by running up and down the ash tree.